D2 has released a new 9 inch tablet into their lineup. After getting some time to test it out, we found that there were some ups and downs, and only a couple improvements over the previous models.

This newest addition to the D2 lineup has a couple improved features over its predecessors, but doesn’t completely impress.

The 962’s physical design is very similar to the earlier models, but thinner and has a more flattened back. We were happy to see that the soft matte finish on the back came back with this model, after we saw the 961 had the metallic backing. With the slight change in width, the tablet is much more comfortable to hold.

While we liked the feel of the tablet, the placement of the buttons has been a cause of slight frustration since we’ve begun using the tablet. There is a front facing camera that would usually indicate the top of the tablet, but the power and volume buttons sit along the opposite edge. This is the most awkward when trying to adjust the volume while using the tablet in landscape mode. It seems like the design was made with the intent of the tablet being held primarily in portrait mode, so the volume buttons seem to be facing the wrong way in landscape mode, down is on the right and up is on the left.

The design has been improved, making the tablet easier to hold, but the placement of the buttons takes a little getting used to. 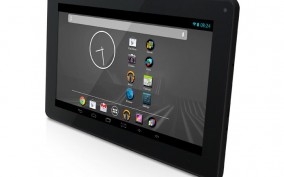 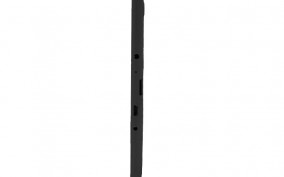 If you’re planning on streaming high-resolution media on the tablet, you may want to keep looking. That said, if you will be using the tablet for causal streaming or gaming, the display is much more tolerable. The 962 comes in with a slightly unimpressive 800x480px resolution. This does look decent when looking directly at the tablet, but if it is angled at all, blacks and other colors wash out.

The camera does have a couple additional settings to allow for special shots, and adjustments. These settings include panoramic, and white balance adjustments. However, the placement of these options is hidden; to find the menu, the user must press and hold on any point of the screen and the menu will pop up. It took a second to figure it out, but we never really figured out the advantage of doing it that way.

The tablet works pretty much as expected. It comes preloaded with Android 4.2 Jelly Bean OS, and is Google certified, which means Google Play Store Apps are available. Running apps, playing music, and streaming movies over WiFi drained the battery in about 4 hours, close to what D2 estimated in their specifications. It charges both by Micro USB, and by DC port.

With 8 GB of on-board storage, the tablet has a good amount of storage to load up with music and apps. In addition, the tablet also has a Micro SD slot that can support up to 32 GB of extra storage.

The thinner profile of this tablet, and the return to the matte rubberized finish does make it a slightly better version of its predecessors, but the lack of upgrades keeps it from really being much better. Without an upgraded screen and a higher quality camera, we can’t say that we are completely satisfied with the tablet. It was light enough to make the 9 inch tablet less unwieldy, the best feature of the tablet.